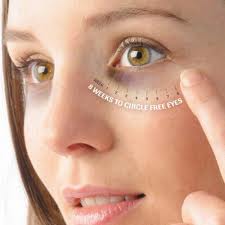 Dark circles that appear beneath the lower eyelid make you look tired and exhausted and your friends and family members always ask if you have taken enough sleep or if you watch TV too much. Apart from these simple reasons, there are some medical causes behind dark circles under eyes which most of us just do not know.

The first step in the dark circles treatment is to dig out the reasons behind your dark circles. Once you know their cause, you will be able to choose the right treatment for yourself.

Thin eyelid skin: Sometimes people have thin eyelid skin. The skin is so thin that you can see through it and see the color of the eyelid muscle. They do not need to alter their diet or their sleeping routines because it will not make their skin thick.

Iron deficiency: If you have dark circles, you may be iron deficient. You can have your blood test report to see if your blood has required quantity of iron or not.

Pigment: Excessive sun exposure often develops brown pigment on the lower eyelid that makes skin under eyes appear black. If you apply sun block before going out, you can avoid this situation. People who have dark skin types such as African American, Hispanic, Asian and Arabs are more prone to pigmentation of lower eyelid.

Hollow eye: People, who do not have sufficient amount of fat tissues around their eyeballs, often develop a hollow eye appearance. Mostly it runs it runs in families and is very common in people of central Asia.

Arcus Marginalis Deformity: Some people have a deep depression beneath the lower eyelid which is an anatomic and structural condition. Usually it is inherited. A small structure called arcus marginalis which binds the lower eyelid skin to the bone of the eyelid socket, develops this depression. The skin of the eyelid above the arcus marginalis sags and makes a deep shadow which is referred to as a dark circle beneath the eyes.

Eyelid aging: As your aging process progresses, your skin starts to sag and as lower eyelid becomes lax it fails to hold normal quantity of fat tissues which lie below the eyeball. Fat tissues put force on lower eyelid and form a puffy eye or eye bag. This eye bag creates dark shadow under eyes.

Treatments for dark circles under eyes

Intense pulsed light: Sometimes blood vessels in area under eyes appear as purple or blue. IPL treats these dark circles under eyes. IPL is a flash light and it targets color of a pigment in blood vessels.

Some surgeons do not practice IPL in sensitive areas like skin under eyes.

Skin resurfacing for under eye circles: If you have dark circles laser treatment may be the best option for you. Laser resurfacing reduces dark circles by increasing collagen production, decreasing pigmentation problems and making skin smooth. However, it is good to use it as part of a combination approach to treat dark circles.

Facial fillers: Injectable fillers use hyaluronic acid to make area under eye smooth, thus reducing dark circles. They are temporary and last from a few months to one year. Then they are absorbed by the body.

Fat injections: Fat tissues obtained from the patient’s own body can be used to treat dark circles under eyes. They may show permanent results.

What Makes Laser a Good Choice for Hair Removal!